The Ivy League of Comedy: Tom Ryan and Clayton Fletcher 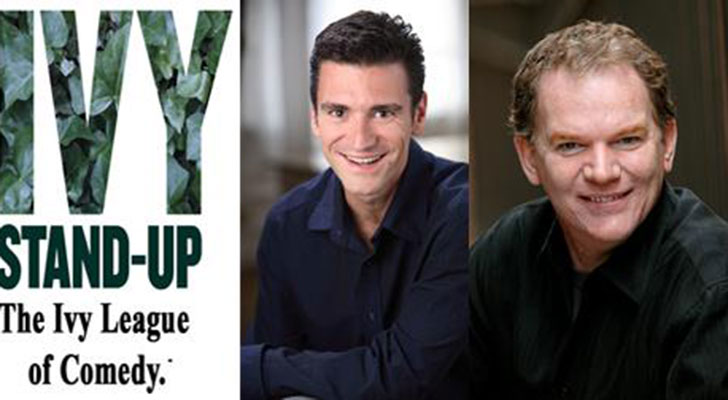 Tom Ryan:
Tom Ryan has been a full-time standup comedian for over twenty years. He has made two appearances on the Late Show with David Letterman. Tom Ryan works steadily at comedy clubs, concert venues, corporate functions and colleges across the U.S. In addition to his Letterman appearances, he has also been featured on Showtime, A&E, Comedy Central and NBC. He has performed as the opening act in concert for B.B. King, Natalie Cole, Jeff Beck, Earth, Wind and Fire, Aretha Franklin, Tim Allen, Steven Wright, Jerry Seinfeld, and Dennis Miller just to name a few.
His original style makes it easy for him to write for special events. He has contributed monologue jokes to the award-winning “Politically Incorrect with Bill Maher” and regularly headlines corporate events. Tom believes that the best comedy comes from the most unlikely sources. Here is an example from his act: “I was driving around the other day and my oil light came on. But that little symbol looks nothing like an oil can. When it first came on I thought well, apparently my car is low on gravy.”

Clayton Fletcher:
Heard every day on Sirius/XM Radio’s Laugh USA, Blue Collar Comedy, and Jamie Foxx’s Foxxhole stations, Clayton Fletcher is an American stand-up comedian who lives in New York City and performs throughout the USA, Europe, Australia, and the Caribbean. Recently named ‘Best of the Fest’ at the Stockholm Comedy Festival, Clayton’s has been featured on Hulu-TV’s “Comedy Brew,” MSNBC’s “Your Business,” ESPN’s “World Series of Poker,” and Comcast-TV’s “Who’s Laughing Now?” Clayton Fletcher allows us to see the world through the eyes of the son of a poker-playing mom and a jazz musician dad. His smart, clean, provocative comedy is geared towards audiences hungry for laughs without all of the crude shock value relied upon by so many modern stand-up comics. Drawing on his extensive theatre background, Fletcher brings to life all of the fun adventures his lifestyle provides every weekend at The Clayton Fletcher Show, which has been running at New York Comedy Club for over seven years. This comic proves once and for all that funny is funny, no matter who or even where you are!

The Ivy League of Comedy is the premier group of stand-up comedians touring America. Known for their elite brand of clever comedy, you’ve heard their brilliant comedic voices on late-night TV and Comedy Central. Now come to see them live on stage!

The Ivy League of Comedy honors audiences with original, well-written comedy that doesn’t resort to playing on stereotypes or picking on the audience. From theatres to corporate events to fund-raising shows for charities, The Ivy League of Comedy brings you stand-up comedy’s funniest and brightest.
This hilarious comedy show is as perfect for entertaining your clients as for a casual night out with friends. Wouldn’t you rather be the one talking about the show instead of just hearing about it later? Don’t be disappointed that you missed out. Buy your tickets now!