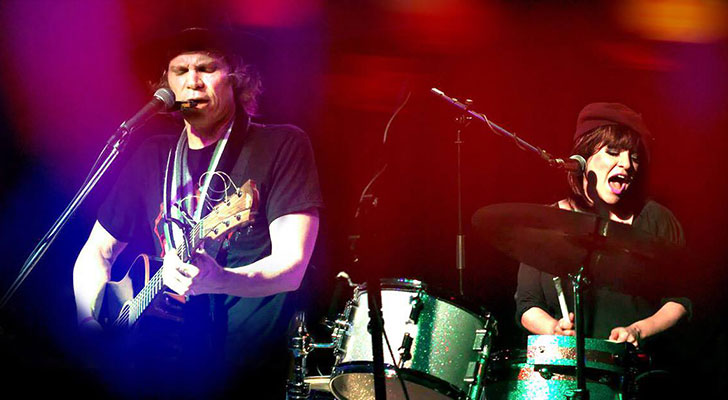 PALEFACE Live at Triumph Brewing Company In New Hope PA, Sept 15th! Please rsvp for event reminder + please help us spread the word, by sharing the event & inviting your friends. Thanks so much for your support! See you soon 🙂 PALEFACE (and Mo)

Prolific influential Alt-folk cult-­hero, PALEFACE, is now a high-energy & charismatic duo featuring his girlfriend Monica “Mo” Samalot, on drum-kit & charming candied vocal harmonies. PALEFACE, was schooled musically by friend Daniel Johnston and soon discovered at an NYC open mic by Danny Fields (The Stooges, The Ramones, MC5). He’s released over a dozen records including two major label releases, and has been called a major influence & inspiration by a wide range of artists including Grammy Award recipient BECK. Paleface has collaborated on three albums by The Avett Brothers. He is also visual artist who’s been selling his collectible music inspired paintings at concerts, art shows, festivals and via his website
http://PalefaceOnline.com/

“Paleface is a gem, a brilliant man…one of the greatest songwriters on Earth” The Avett Brothers

“Paleface is a great songwriter, a generous friend, and a big influence on my early stuff” BECK

“Paleface is one of the scene’s best-loved products.” Time Out NY

“Melodic songs with a sunny vibe while maintaining an edge.” The New Yorker

“His bright songwriting and even more fiery performance style will set a room in motion… it’s fiercely fresh in pulse, and he and his band light up stages every night.” – Orlando Weekly