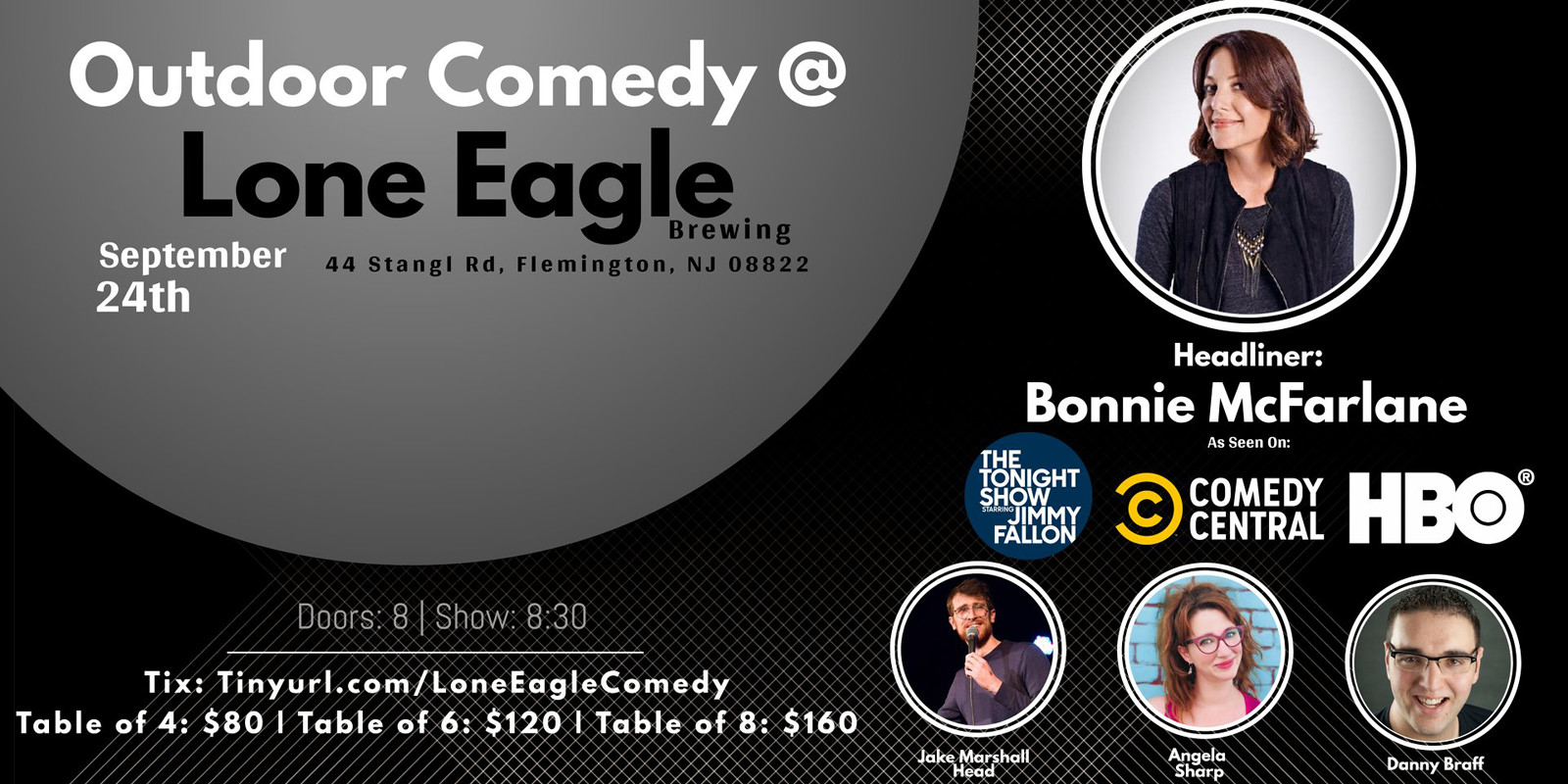 Outdoor Stand-up Comedy show at Lone Eagle Brewing featuring the best and brightest comedians from around the country!
*Social Distancing Required, Please do not come if you are feeling ill or have been exposed to someone with the virus.*
To be able to properly keep social distancing we are selling tables of 4, 6, and 8 instead of individual tickets. If you don’t have 4 people you can still come but you still need to purchase a table of 4. This is for everybody’s safety.
Bonnie McFarlane hails from Northern Canada but is still always cold. A national headlining comedian, McFarlane’s radio and television credits includes an HBO special, two comedy central specials, three Letterman appearances, a Tonight Show appearance, The Howard Stern Show and a regular on the Opie and Anthony/Jimmy radio show. Bonnie regularly appears as a guest on Fox’s Redeye and is a regular cast panelist on Comedy Central’s The Nightly Show starring Larry Willmore. Bonnie is also a cast member on the current season of Tru TV’s, How To Be A Grown Up. Bonnie has acted in numerous television shows and can be seen in the newly acclaimed web series “Cop Show” starring Colin Quinn and Jerry Seinfeld. She most recently made an award winning comedy documentary feature about funny women called Women Aren’t Funny starring Joan Rivers, Rosie O’Donnell, Sarah Silverman and Maria Bamford. It’s available on iTunes and Netfix. The HuffingtonPost listed McFarlane as the number one funniest female you should know. Marie Claire Magazine said she is one of the 50 Funniest Women Right Now. Paste Magazine chose the podcast she does with her husband, Rich Vos as one of the Top Ten best comedy podcasts today. It’s called My Wife Hates Me. McFarlane also co-hosts a national radio show on Sirius XM with her husband based on the podcast. Bonnie has written a book for Harper Collins that will be coming out February 23 2016 called: You’re Better Than Me. Her comedy has been described as sly, inventive and edgy. Huffpo referred to her crowd work as “the best in the biz.” Come see Bonnie live right here in Flemington!
Also on the show will be:
Danny Braff
Angela Sharp
Jake Marshall Head
Doors: 8 | Show: 8:30
2 item minimum per person
Table of 4: $80 online | Table of 6: $120 | Table of 8: $ 160