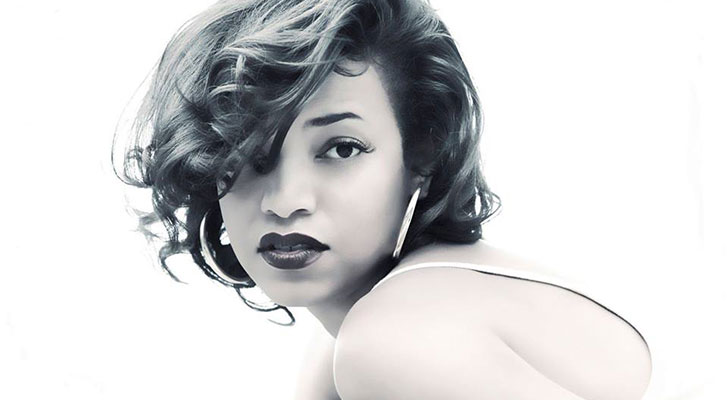 Doors 7:00PM, Showtime 8:00PM At first glance, the title may be simple, but Alice Smith’s new album She is anything but. An intoxicating mixture of rock, pop and

At first glance, the title may be simple, but Alice Smith’s new album She is anything but. An intoxicating mixture of rock, pop and R&B, the album reveals a singer/songwriter/producer who has an unshakable sense of self and the attitude to match. Get ready, because here comes She.

Alice was raised between Washington DC and Augusta, Georgia on a steady diet of gospel, pop, soul and a little go-go thrown in for good measure. Those influences remain on new songs like “Be Easy” and “The One”, representing an evolution from her critically-acclaimed debut album, For Lovers, Dreamers & Me, released in 2006.

In the time between albums, her fans across the globe have followed her remarkable live show to world famous venues like NYC’s Joe’s Pub, LA’s Wiltern Theater and Paris’ Le Zenith. Known for a 4-octave vocal range, Alice has the kind of live performance that can coax goosebumps and tears from even the most jaded listener. She has honed her stage presence since cutting her teeth in NYC’s Afro-Punk Scene alongside artists like Tamar Kali and Imani Coppola. To her devoted followers, Alice’s follow-up album can’t come soon enough.

“I’ve been through a lot of heartaches and setbacks,” she admits, while adding, “I’m grateful for everything that’s happened. Today I’m just trying to practice my gratefulness because I’m really comfortable with the place I’m at now, and I am so excited about She being released in March.”

Riding the wave of For Lovers, Dreamers & Me, an artful blend of bluesy, soulful vocals and mid-tempo grooves that Vibe Magazine said “evoke[s] Fiona Apple’s finest material,” Alice signed to Epic Records. Her single “Dream” was nominated for a Grammy Award in the Best Urban/Alternative category, and her sophomore release seemed to be full steam ahead. However, the label soon underwent numerous, well-documented changes to its executive staff. Though she was producing new material at a steady clip, it was delayed by the inner workings of her label.

While recordings were held up in legal snafus for months stretching into years, Alice found herself going back to the source. She reconnected with producer Alex Elena, (known for collaborations with artists including Lily Allen and Avril Levigne), with whom she recorded For Lovers, Dreamers & Me. The pair went back to the beginning. “Alex came to my house, and we cooked and ate and talked—and we finished the album,” explains Alice.

Much of the album was also recorded in Hawaii, where she joined forces with writer/producer Reginald “Syience” Perry (Beyonce, John Legend, Ne-Yo) and singer/songwriter Rebecca Jordan. “We got a house and would record in another structure on the property with a huge Parvati statue in it,” describes Alice. “That’s the SHE that inspired the conversation leading to the song and album title.” The Hindu goddess of love, devotion and power, Parvati is a remarkably fitting agent for a project that has led to Alice’s own reincarnation as an artist.

Out of this remarkably intimate setting came songs like “Cabaret,” where Alice seems to be daring herself with lines like, “What kind of chances will you take?” Sultry and swinging, “Cabaret” ushers in a new era of her sound—fiercely honed pop drenched in notes of soul, orchestral arrangements and multi-hued harmonies.
The sound “is much more free and light,” says Alice. “I’m still an emotional person, but the music is getting lighter. There is more ease.”

That lightness is revealed in songs like “Ocean,” with a Calypso twang and earthy, Janis-influenced vocals. Produced by Alex Elena, the track is one of the last Alice wrote for the album. She opens, crooning, “There’s something I’ve been dying to say,” a statement that seems to encompass all the disappointments and ultimate triumphs of the process of bringing She to light.

Something else happened during this period when She has been coming to life—Alice became a mother. “Having babies is a really powerful feeling,” she muses, and the birth of her daughter has been one of the moving experiences that finds its way into the words and notes of She. Even when setbacks revealed themselves, “I started to think about who I want her mother to be, knowing that the best way to teach is to show.”

Alice’s journey of bringing that higher self to life—documented in full, rollicking volume—is She. And her story has never sounded so sweet.